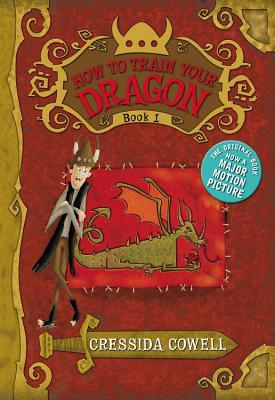 My family only watched the first How to Train Your Dragon film last year. Prior to that, I felt like Sweet Potato was too little and would be scared. Both of my kids loved the movie!

Shortly after watching it, my son read the first book in the series by Cressida Cowell. He kept telling me how different the story was, so I decided to read it myself. When I saw that my library had the audiobook version, narrated by David Tennant, I checked it out!

I listened to the book with both of my kids, and I will say that they loved it – they giggled uproariously at Hiccup’s and Toothless’ antics. I, on the other hand, was underwhelmed. The story is aimed squarely at middle grade boys – full of potty / gross out humor. Sigh.

The very basic storyline, as well as place and character names, are the same as in the film, but the details of the plot are completely different! The only female character is Hiccup’s mother, Valhallarama, who has maybe 2-3 small scenes. Apparently, the strong female lead, Astrid, was invented for the movie. And Toothless, so adorably puppy-esque in the film, is annoying in the extreme.

Honestly, if I had been reading the print version, I would’ve put it down after the first chapter or two. The only reason I kept going was David Tennant’s fabulous narration. His Scottish accent is in full force and it is lovely. He provides distinct voices for every character, without ever sounding ridiculous. Brilliant!

I will not be reading any of the other books in this series, but I will be trying to find some of David Tennant’s other works.

4 thoughts on “What I’m Reading: How to Train Your Dragon (Audiobook)”