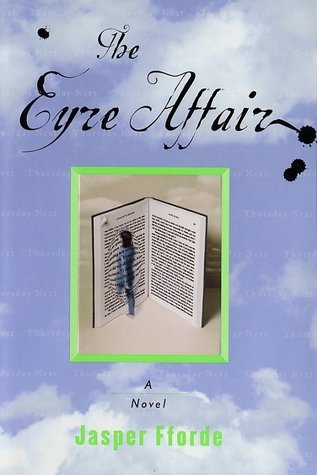 I first heard about Jasper Fforde’s Thursday Next series from Stephanie @ Don’t Be Afraid of the Dork. She recommended the author for fans of Doctor Who, so, of course, I had to check him out! I started with the first book in the series, The Eyre Affair.

“Welcome to a surreal version of Great Britain, circa 1985, where time travel is routine, cloning is a reality (dodos are the resurrected pet of choice), and literature is taken very, very seriously. England is a virtual police state where an aunt can get lost (literally) in a Wordsworth poem, militant Baconians heckle performances of Hamlet, and forging Byronic verse is a punishable offense. All this is business as usual for Thursday Next, renowned Special Operative in literary detection, until someone begins kidnapping characters from works of literature. When Jane Eyre is plucked from the pages of Brontë’s novel, Thursday must track down the villain and enter the novel herself to avert a heinous act of literary homicide.”

I thoroughly enjoyed Fforde’s fictional England where everything is familiar but different from our reality. The setting reminded me of “The Wedding of River Song“, which is actually the first episode of Doctor Who I ever watched. Fforde really just throws the reader right into his alternate dimension and let’s the world building happen gradually.

The protagonist, Thursday, is a scrappy heroine, reminiscent of Tuppence Beresford or Stephanie Plum (although much more competent than Plum). She doesn’t follow rules or think ahead, she just acts. This is a trait I appreciate in a fictional detective, probably because it is vastly different from my own personality.

At times I found the story confusing. There is a plethora of characters, a heavy dose of back story, and the aforementioned world building, which all became a teeny bit overwhelming. I’m hoping that the second book will be a bit easier to follow in that regard, as I’ll already be familiar with those elements.

I loved the way Fforde wrote about Charlotte Bronte’s classic characters. Both Mr. Fforde and Thursday Next treated Jane Eyre, Mr. Rochester, and the rest of Bronte’s creations, with the dignity and care they deserve (with the notably hilarious exception of St. John Rivers).

One of my favorite passages is this exchange between Thursday’s aunt and uncle:

“Just stand here. If all goes well, as soon as I press this large green button the worms will open a door to the daffodils that Wordsworth knew and loved.”
“And if all doesn’t go well?” asked Polly slightly nervously. Owens’ demise inside a giant meringue never failed to impinge on her thoughts whenever she guinea-pigged one of her husband’s machines, but apart from some slight singeing while testing a one-man butane-powered pantomime horse, none of Mycroft’s devices had ever harmed her at all.
“Hmm,” said Mycroft thoughtfully, “it is possible although highly unlikely that I could start a chain reaction that will fuse matter and annihilate the known universe.”
“Really?”
“No, not really at all. My little joke. Are you ready?”
Polly smiled.
“Ready.”

4 thoughts on “What I’m Reading: The Eyre Affair”